"If I had more time, I would have written a shorter letter."

"Great literature is simply language charged with meaning to the utmost possible degree."

Programming, a form of literature, is greatest when it does the most with the least.

The job of a programmer is to produce order out of chaos, and the more compactly that order can be expressed the better.

Although we can all think of exceptions that prove the rule, shorter code is better code in general.

But how is the software architect or executive to make use of this? It is all very well for programmers to talk about regular expressions, lambda-lifting, and higher-order programming, and I wish more did. But many of us are stuck in the dreary dull world of enterprise software where oceans of fluffy code suffocate the user, like a child falling into a vat of cotton candy. Working with enterprise software sometimes feels like beating a cloud.

What is really needed is a model of technical debt that would allow software engineers to speak with a precision and certitude similar to accountants and structural engineers. A structural engineer can, with enough study, tell you what load a bridge should bear. An accountant, with enough study, can tell you with some certainty the soundness of a firm by examining the books. Software engineers can’t, at present, tell you the soundness of a codebase.

We can of course judge a codebase by two active criteria: if people use it, it’s valuable. If it’s testable, it’s somewhat sound, to the extent that our tests measure fitness. But we can’t examine a codebase and determine what the maintenance costs will be.

Codebases tend to have technical debt. That is, they have problems that aren’t apparent at first use or inspection, which prevent the evolution of the codebase efficiently and increase the maintenance costs. I’ll take my hat off to anyone who can produce a good model of technical debt that’s as useful as double-entry bookkeeping.

But in the meantime, I suggest this simple formula for measuring the “badness” of the a codebase: B = L2.5.

Where B is the “badness” of the code, and L is the number of lines of code in the system.

Obviously, this is a bit of joke, but there’s a grain of truth in any good joke. We don’t have a crisp definition of “badness.” And two systems can have equal badness with different numbers of lines of code, so this equation can’t be, strictly speaking, true. A physicist will point out that a dimensional analysis of this equation produces nothing meaningful at all, whereas E = mc2 actually produces units of kg * m/s2 (Joules) on both sides. Nonetheless, if forced to give a rule for code badness in only six symbols, I’ll stand behind this one as the best possible.

Q: When can we possibly compare the “badness” of a system to something in order to make a decision?

A: When we compare it the badness of a modification of the same system.

Perhaps I have the exponent wrong. Perhaps we should consider other curves. In the figure below: 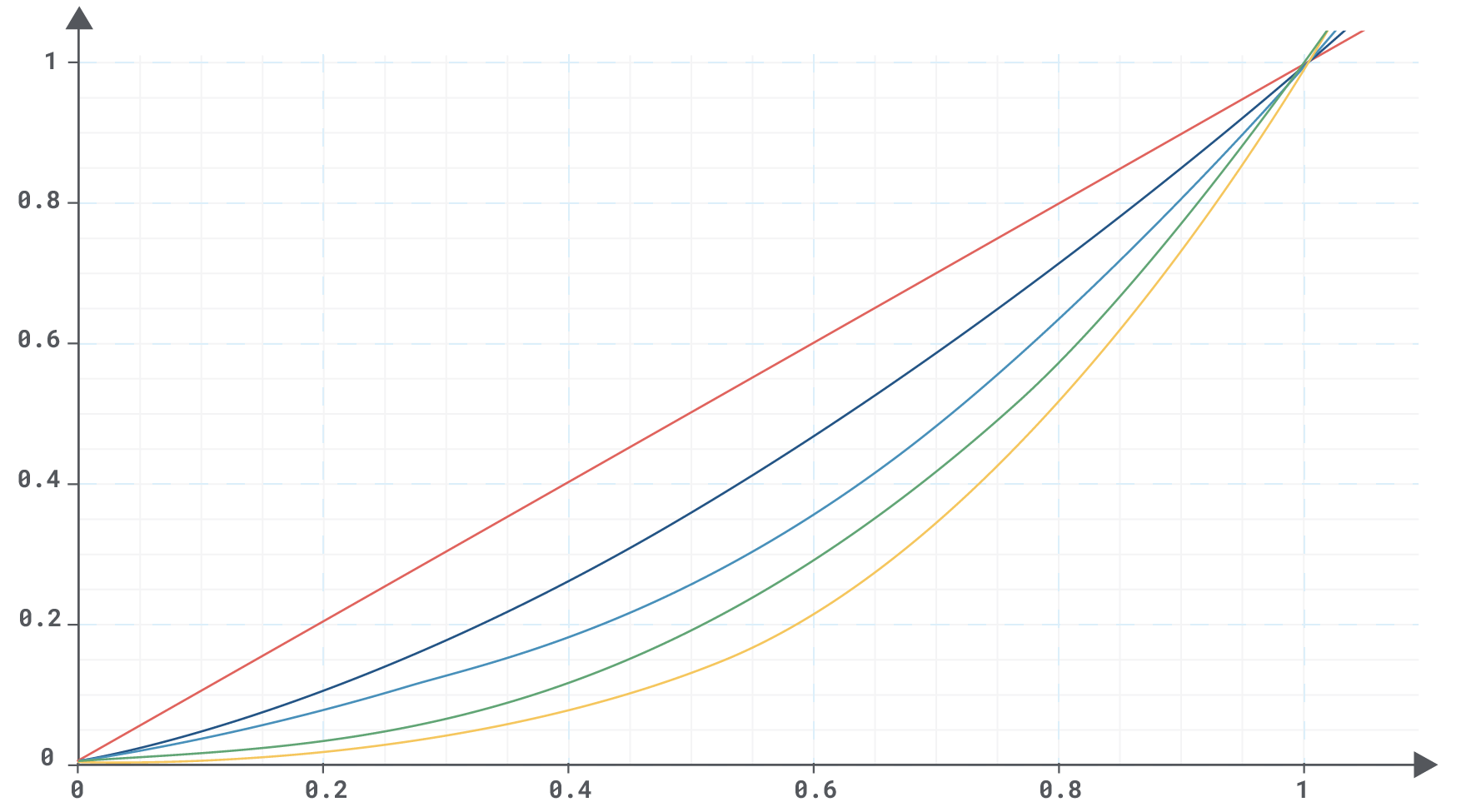 I claim that the green line is the best line; that in general in a legacy system a decrease in number of lines of code of 20% does indeed decrease the overall maintenance cost extended through perpetuity by 43%.

This may seem fantastic. Surely the exponent is too high — maybe B is just the square of the number of lines of code?

But let us consider the total cost of ownership. Suppose there’s a 1-million-lines-of-code project and you could wave a magic wand and make it a 100K-line system with approximately the same quality. This is approximately a change from a 10-person maintenance system to a 1-person maintenance team. Significant, but not 1.7%. But let us now consider the cost of rewriting the system every 10 years to keep up with changes in technology. Rewriting a 100K system is far more manageable. That’s something that a programmer could probably personally do in one year, as opposed to a team. A team is much harder to manage than a single person — there’s significant communication overhead on a team. It is much more expensive to hire a team.

Additionally, the small system could be expected to have 10% of the bugs of the original system. If each bug costs you something in user satisfaction, that surely must be counted. Even more importantly, the cost of fixing each one of these bugs will be less, and the time to turn them around and the danger of introducing a new bug will be much less. The cost of performing enhancements will be considerably less. Taking these things into account, we’re now getting much closer to 1.7% the cost of the mega-line project.

It is clear that each increase in complexity cost us multiple times:

Consider also that some systems become so complex that attempts to rewrite them fail completely. This is hard to work into a cost estimate, but surely it’s a point in favor of a nonlinear decrease in costs as well. In government work, this is perhaps easier to understand. How much would the Air Force pay for more reliable and secure software for its software systems? At some point, bugs and the inability to make enhancements starts to become a strategic problem that can’t be expressed on a spreadsheet.

Believe it or not, I’m a mathematician and computer scientist. I like proofs. I love proofs. We aren’t operating in the realm of proofs.

We all know the exponent isn’t 2.5; I pulled that out of my hat to match my experience rewriting and maintaining legacy systems.

But I’ll defend the proposition that the exponent is closer to 2.5 than 2.0, and I hope I’ve convinced you that 1.5 is out of the question.