I spent part of my childhood living in Italy when the memory of World War 2 was still very present. As a kid, I’d go for walks in the woods with my family on the weekends and we’d regularly encounter abandoned bunkers. It was a solemn reminder of what my family had only narrowly avoided. My paternal grandfather was from Dresden and fled to Britain as the Nazi party took control of Germany, eventually making his way to Canada and later the U.S. I literally wouldn’t be here if those countries hadn’t allowed him to enter.

Today, over 26 million people worldwide, many fleeing dictatorships in Syria and Venezuela or civil wars in Africa and Asia, have been given refugee status by the United Nations High Commissioner for Refugees (UNHCR). While less than 1% will end up in the U.S. refugee system, I believe the U.S. has a moral imperative to act and to take in as many people as possible each year.

There’s been a lot of conversation in the U.S. and the world about how best to address the number of people forcibly displaced, and it remains a huge and growing humanitarian crisis. That isn’t to say nothing is being done to address this challenge. Last summer, I had the chance to add my own piece to the puzzle, working on an issue that had been on my mind since 2016. When I saw Eric Hysen’s post on an Obama Alumni listserv saying he was heading up a project with the National Conference on Citizenship (NCoC) on refugee admissions, I sent him an email that basically said: “Remember me? I really wanted to work on this topic with you four years ago.”

A typical Skylight project has us working hand-in-hand with a government agency, but this was a four-month, non-profit project with a fixed-price contract. I had to convince Chris Cairns to lend me out as Service Design Lead and the sole Skylighter on this small team, which he was kind enough to agree to.

So off I went, looking to learn as much as I could about the current state of the refugee admissions program, its health, and how to devise a roadmap of tactical recommendations for improving it and restarting the pipeline that had ground to a near standstill over the past four years. I had to find my research subjects — policy experts, advocates, resettlement agencies, state-refugee coordinators, and refugees who’d been through the process — as well as build relationships and convince them to talk to me. I endeavored to earn the trust of former refugees over video and ensure they understood that they could drive the conversation as they shared what were often difficult episodes in their lives.

During one of these calls, I met a refugee from Angola whom I’ll call Inês. She told me, “I was in a camp for 17 years, and I ate the same meal every day. The same thing they gave me the first day is what I had the last day.” Living in a refugee settlement is an intense experience where you really have no agency at all and are dependent on other people for everything. One of the big obstacles we had was showing policymakers that the challenges refugees face aren’t over after arriving in the U.S. Imagine being in this situation for years and, finally, you get to the U.S. but then are told in three months we want you to be completely independent. We want you to be able to speak English, have a job, and navigate our bureaucracy (sign up for health insurance or register for a driver’s license). These things aren’t necessarily easy even for people who’ve lived here their whole lives.

Thankfully, I had some great guides into the process. Ariana Berengaut was Director of the Penn Biden Center (and former speechwriter for Anthony Blinken when he was Deputy Secretary of State under Obama). Eric Hysen was a senior fellow at NCoC, previously served as head of the U.S. Digital Service (USDS) team at the Department of Homeland Security (DHS), and was recently appointed the Chief Information Officer at DHS. Together, they knew a lot of the players in the space, and we had great access to helpful resources, for example, the International Refugee Assistance Project (IRAP), a group of lawyers who advocate for, and work directly with, refugees and asylees, and help to do things like draft sample legislation.

Dana Chisnell at NCoC was also an invaluable resource as she was running Project Redesign. In addition to being an expert researcher and a great person to bounce ideas off of, Dana had terrific insights. She knew how to write about refugees without saying who they are and how to interview 20 people at once. While it’s often hard to get meaningful answers in a big group like that, Dana found ways of breaking down the conversation.

Sarah Saltiel not only organized our teams’ 100+ interviews, she took incredible notes, and kept us all on track. Sarah also leveraged her previous experience in talent operations at USDS to recommend the use of federal hiring authorities to streamline the hiring of Refugee Officers. David Leftwich and Salma Mousa created a data model based on publicly-available pipeline information to help us quantify and prioritize the recommendations developed out of our research interview.

In the end, bolstered by the acumen and superb wordsmithing from Policy Lead, Rosanna Kim, our small team was proud to complete a report with concrete steps a new administration could take in its first 100 days, year, and four years. A big part of that report was the refugee journey map. I was struck by how well received it was. I got feedback from people who had been working on refugee policy for years that they’d never seen this before — that they’d never looked at the whole process from the refugee perspective. Getting policymakers to see their policies from the vantage of those affected by them is something I’m constantly striving for as a UX researcher, and is the first step towards positive change. 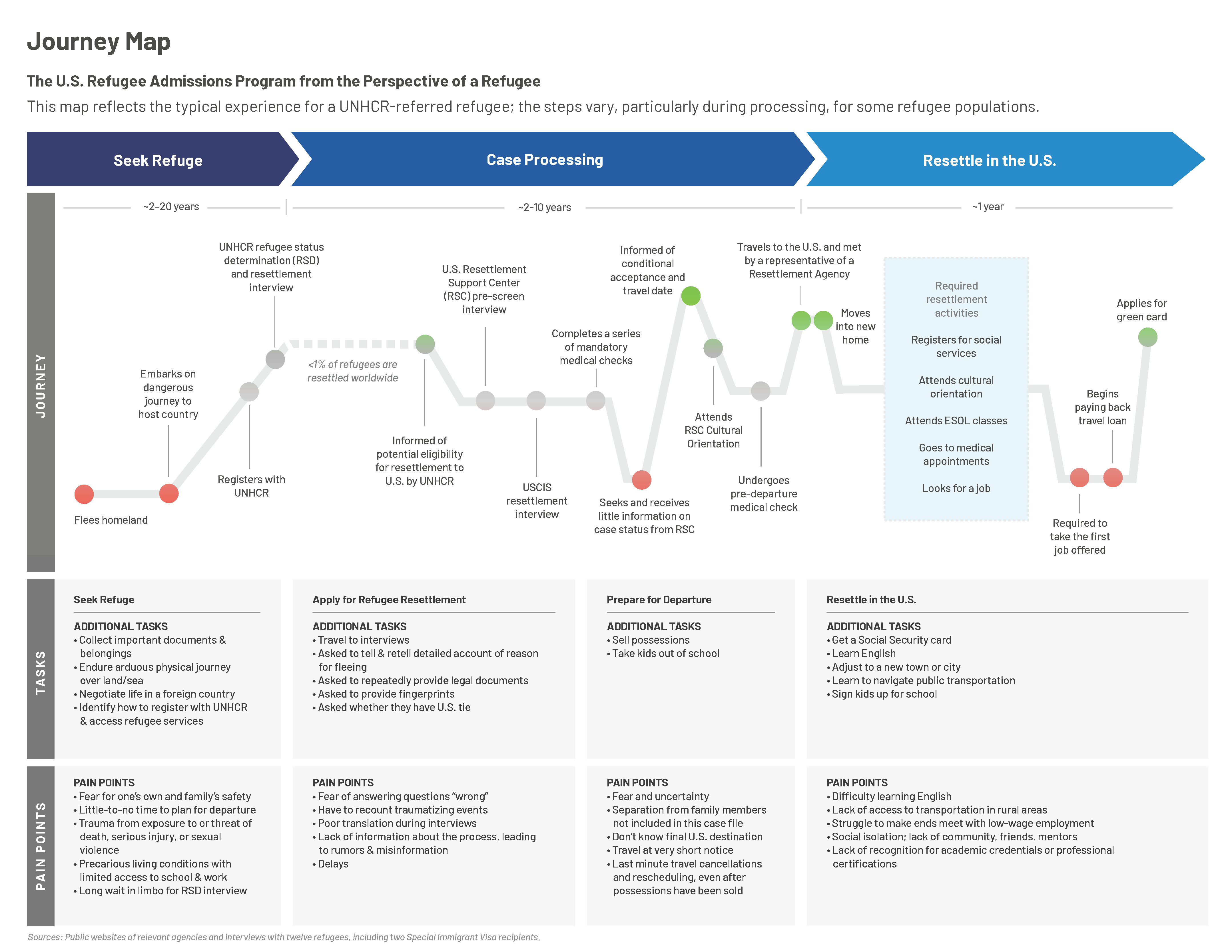 Every year, the President sets what’s called the Presidential Determination (PD), which says how many refugees, and from which countries, are allowed to come to the U.S. in that fiscal year. President Biden had pledged to increase the count from 15,000 last year to 62,500 refugee admissions in FY21 (125,000 in FY22 and increasing thereafter). After taking criticism for a proposed number that would keep admissions the same, the President announced that a new PD will be signed in May. Both Ariana (senior adviser to National Security Adviser Jake Sullivan) and Eric have taken roles in the administration. Having people with this depth of understanding about the challenges facing the U.S. Refugee Admissions Program (USRAP) in senior positions makes it more likely the proposed solutions will be implemented.

The refugees I spoke with through this project are some of the most amazingly generous and resilient humans I’ve ever met. They’ve overcome incredible obstacles to come to the U.S. I feel like you want those kinds of people in your country: people who have the ingenuity and perseverance to overcome so much that has been stacked against them. If the current administration and those who value what immigrants bring to this country can help reset the national mindset about refugee resettlement, all of us living in this country would have so much to gain.